The Labradoodle is a cross between a Labrador and a Poodle. Our Labradoodles inherit the intelligence of a Poodle and the easy-going nature of a Labrador while also having the benefit of a non-shedding wool coat. This coat is great for allergies or for people who want an inside dog without the hair that usually comes with it. We use proven pedigree parents to ensure our dogs are free of genetic disorders. Life expectancy is 12 - 16 years.

We are one of the rare Labradoodle breeders that still breed True Labradoodles. Our Labradoodles only have Labrador and Poodle DNA, and there are no other breeds are mixed into our Labradoodle lines. At Valley View, we don't take short cuts to get different colours or sizes of Labradoodles by adding other breeds like Spoodles, Cocker Spaniels, Golden Retrievers and Wheaton Terriers. It has taken 20 years of breeding to get non-shedding Parti Labradoodles. It is done by persistence, not by taking short cuts for a quick dollar. A lot of Labradoodle association breeders have used several different types of dog breeds in their lines of Labradoodles which is allowed in their own rules. By adding different breeds like Irish Water Spaniel, Curly Coat Retriever, American Cocker Spaniel, English Cocker Spaniel, Wheaton Terrier, Portuguese Water Dogs, Spoodles, Groodles and other breeds they don't tell you about into their Labradoodles, they have added the potential for all the different genetic problems of each breed into their lines. A True/Real Labradoodle has only Labrador and Poodle DNA, and nothing else in its breeding, that is what a Labradoodle should be. What is generally known as an "Australian Labradoodle" is a mix of many breeds, which is not necessarily desirable.

We breed three sizes of Labradoodles.

Labradoodles are the ultimate family companion, loving and kind with children, intelligent with adults, patient and devoted to the elderly and are sociable with other animals. Labradoodles are always eager to accompany you for a walk or bike/horse riding. Still, they are equally as happy receiving pats or snoozing close to you. Running, fetching the ball, swimming, cuddles and stretching out for a nap are some of their favourite pastimes.

The first Labradoodle litter was bred in Australia in 1989 by the Guide Dogs Victoria (GDV). They were looking for a non-shedding guide dog for a woman named Pat Blum who lived with vision impairment but had not applied for a Guide Dog because of her husband Rich's allergy to dogs. When GDV agreed to breed the first litter of Labradoodles in an attempt to lessen the likelihood of allergic reactions, Pat was overjoyed.
Sultan and his litter mates Sheik and Simon were bred by Wally Conron in 1989 by mating a standard poodle called Harley and a Labrador named Brandy. It is important to note that many early generation Labradoodles are not non-shedding. Sheik and Simon's fur samples repeatedly caused allergic reactions, while even Sultan's adult coat caused no reaction at all. Sultan turned out to be perfect for Pat and Rich, and he was an exceptional Guide Dog even capable of climbing ladders.
Support Guide Dogs Victoria
The 'Labradoodle' name was thought of in an attempt to find new homes for Sheik and Simon, and after an ad in the Newspaper, Guide Dogs Victoria's phones rang hot.
Since then the Labradoodle has become a popular family pet in Australia and around the world. We are one of the original Labradoodle breeders and have been breeding them since 1993. 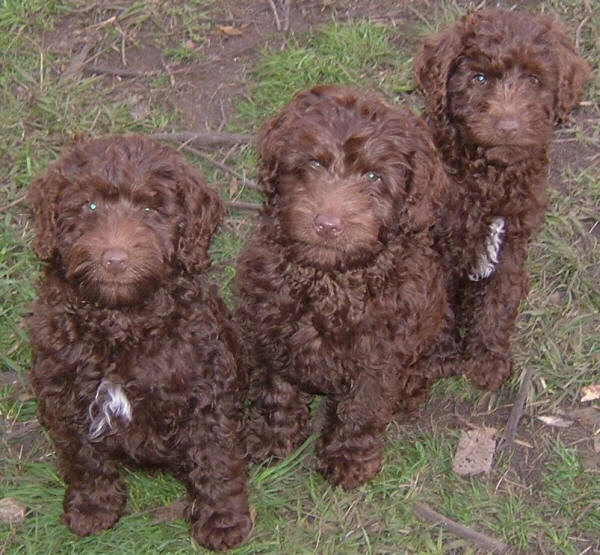